Ghost Trick: Phantom Detective (ゴースト トリック Gōsuto Torikku?) is a puzzle/adventure game for the Nintendo DS and iOS. It was developed mainly by Shu Takumi, the man behind the Ace Attorney series.

The gameplay of Ghost Trick: Phantom Detective mainly consists of two different phases. For the majority of the game, you will be controlling the protagonist, Sissel. Because he is a ghost he must move by possessing inanimate objects to reach his goal. When he poesseses an object, he can manipulate said object if the option is avaliable. An example is opening a door that was closed. First, Sissel would need to possess the door and then perform what is known as a 'Ghost Trick' to open the door. To navigate around an area, the player will need to press the 'Ghost' button to enter the Ghost World. When in the Ghost World, the player needs to drag Sissel to another object to possess it. Sissel's reach is limited, however, so to fully navigate an area, he must utilise the many items around the room.

The other part of the gameplay is controled in exactly the same way, save for a few differences. When you find a dead body, you can communicate with the victim's spirit and travel back four minutes before their death. In this four minutes you have a chance to save the victim from death, by manipulating the items around the room. A timer counts down the seconds untill the victim dies. As the time runs out you may slightly alter the fate of the target, while not averting their fate. This will help your goal and give you a checkpoint to start at if you fail. Because there is an amount of time before the death occurs, you have the possibilty of failure, however, you may try again as many times as needed to save the persons life.

Later on in the game you will encounter Missile's powers, and he's able to swap any 2 objects that have the same shape! He has a longer spirit reach than Sissel, but he cannot manipulate objects or use the telephone lines (use a trick to dial a telephone) because he cannot do a Trick...

Development was handled by the creator of the Ace Attorney series, Shu Takumi. "I first thought of this idea about five years ago," Takumi told Famitsu magazine. "We were working on the third Ace Attorney and figured it was time to start thinking about the next thing. So I came up with a plan to make a new type of mystery, something different in style from Ace Attorney."

The game was originally titled as "Ghost Spy", and was later renamed as "Ghost Trick: Phantom Detective".[1] Following a release on iOS in Japan on December 2010, the iOS version was released for the rest of the world on February 2, 2012. The first two chapters are available for free, with additional chapters costing extra.[2]

In an interview with Official Nintendo Magazine in 2013, Takumi said that he'd love to make a crossover video game between Ghost Trick and Ace Attorney, speculating that Phoenix Wright could be killed, while his killer would be prosecuted by Sissel.[3]

A soundtrack, entitled Ghost Trick Original Sound Track, was released on June 24, 2010. It featured music from the game, composed by Masakazu Sugimori. 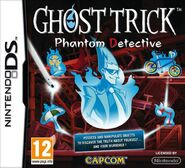 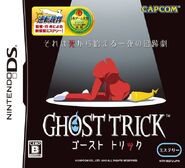 JP Boxart
Add a photo to this gallery

Retrieved from "https://ghosttrick.fandom.com/wiki/Ghost_Trick:_Phantom_Detective?oldid=5593"
Community content is available under CC-BY-SA unless otherwise noted.