Kamila Jowd is the daughter of Detective Jowd and Alma who treats Lynne like her sister. A cheerful girl despite all that happens to her, she stays with Lynne after her father was arrested. She's one of Missile's beloved mistresses that he'll die to protect. Like Lynne, Kamila is fond of listening to music with her headphones at volumes so loud that she can't hear nearby gunshots.

Five years before the events of the game, Kamila made a birthday Rube Goldberg surprise for Alma (Kamila's mother), never suspecting that she herself had been manipulated by Yomiel into adding her father's antique gun to the contraption. The gun shot and killed her mother before her eyes. Her father then tampered with the scene to make it as if he was the one who killed Alma in order to protect his daughter and was arrested in Kamila's place.

During the events of the game, she was caught by Tengo in Lynne's apartment. The hitman wanted only Lynne however, and Kamila was tied up and gagged instead, until Sissel came along and reversed Missile's death by hiding the both of them under the sofa before Tengo came in.

After Tengo went to the junkyard after Lynne, she receives a call from Lynne to bring a music box (which she didn't know contained the antique gun that killed her mother) to Chicken Kitchen at Dead End Drive.

After finding the box with a little help from Sissel, Kamila goes on her way to Chicken Kitchen but was mistaken for Amelie, her neighbour, on the way and was kidnapped by Dandy. While getting kidnapped at Temsik Park, she managed to hide the box Lynne wanted and died once (crushed by Mino) before being saved by Sissel and Missile, though they were unable to stop the kidnapping and she was taken away. For most of the game she is kept in a huge red suitcase, which Dandy drags around. Sissel manages to talk to her when the kidnappers brought her to her old house, but due to Beauty's threat and sixth sense he was unable to rescue her.

Kamila was later brought onto the submarine Yonoa, where she was manipulated by Yomiel into waiting for her father with a gun. The ghost intended to kill Jowd with his own daughter's hands. Instead of Jowd however, it was Lynne who came for her, and Kamila (controlled by Yomiel) was about to shoot Lynne when a torpedo hit the submarine, and Lynne threw herself into harm's way to save her. Lynne died then, crushed by the fallen debris, and Kamila was knocked unconscious.

After a while, Kamila gained consciousness and called the submarine's internal phone line for help, allowing Sissel to pick up her location and save Lynne. After Lynne was safe, she wakes up briefly before fainting again until Yomiel saved both Lynne and her from drowning in the rising seawater coming into the doomed Yonoa.

When a plan was made to save Jowd, Kamila and Lynne were left behind in the sinking submarine as the ghosts, Sissel, Missile (and unknown to anyone, Yomiel) set off on a torpedo to the control room to change Yomiel's fate and the entire timeline.

Kamila appeared as a card in the mobile game called Street Fighter ✕ All Capcom. 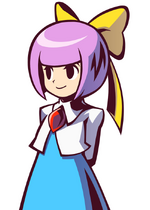 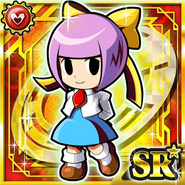 Retrieved from "https://ghosttrick.fandom.com/wiki/Kamila?oldid=5765"
Community content is available under CC-BY-SA unless otherwise noted.