Lynne is the main female protagonist from Ghost Trick: Phantom Detective. She is one of the first characters Sissel meets, and the first one he has to save from death. While Lynne dies multiple times throughout the game, she stays rather optimistic.

She became a detective thanks to Jowd, who had saved her roughly 10 years before the events of the game.

Lynne is easily identified by her brilliant red hair that is shaped to somewhat resemble a rooster's comb and big brown eyes.

She wears an equally brilliant yellow jacket with a navy blue dress underneath. Around her waist is a belt the same color as her hair and adorned with a diamond-shaped buckle. Lynne also wears a pair of knee-high chocolate colored boots; judging by the difference in skin color between her face and her legs, it appears she wears leggings as well.

She is also considered pretty by many of the characters as Ray says "it is a shame such a pretty girl had to die" and many of the officers seem to have crushes on her as one of them calls her his "sweet angel" and another refers to her as "My Lynne", though it doesn't seem like she has a relationship with him. Though not manipulative or even seemingly aware of her own beauty, it seems to work to her advantage as the same officer honored her wish not to report her for her call to the prison office he worked at.

Lynne is characterized by her boundless determination and loyalty, which is evidenced by her intense desire to prove Detective Jowd innocent. Whenever confronted by a seemingly hopeless dilemma, Lynne remains steadfast, confident that a solution exists (which is often Sissel). Despite her quirkiness, Lynne can be very serious, and always seems to understand the gravity of certain situations. Lynne always tries to look on the bright side of people and never seems to bear any grudge against anyone, not even against Yomiel before he revealed his story (but after she discovered his identity).

Lynne is first seen in the very first tutorial chapter in the game. She was shot dead by Jeego, one of Sith's hitmen, when Sissel was just learning his own abilities. Under Ray's tutelage, Sissel learns to turn back time to four minutes before her death and saves her by dropping a wrecking ball on Jeego.

She is a crucial part of Sissel's success in regaining his memories as she investigates leads on saving her hero, Detective Jowd, from being executed unfairly. She's also a target of Commander Sith because of her investigating.

After she calls the police and stays to watch over Yomiel's body, she was taken into custody on suspicion of his murder, where she died a second time right in front of Cabanela. This time she was killed by Tengo, another of Sith's hitmen, but Sissel manages to save her yet again later on by dropping a crate on him.

Lynne then escapes through the basement of the superintendent's office where she was being held, but not before dying a third time to a Rube Goldberg "killing machine" in the basement that is triggered by the basement's light switch. This machine was later revealed to be a replica of Kamila's birthday surprise for her mother. Sissel interrupts the mechanism and saves Lynne again, and the two make a pact to use each other.

Lynne asks Sissel to check Jowd's schedule, and she heads for Chicken Kitchen at 10pm, a place and time that she got from a note she found on Yomiel's body. There she dies for the fourth time as she saves the undercover Detective Memry from Detective Rindge's van as it crashes into the restaurant, killing him and dropping Chicken Kitchen's giant chicken replica over Lynne's head. Sissel fixes that too when he came back from his mission, and Lynne hears of Jowd's execution being carried forward from dawn to 11pm from Rindge, who was kind enough to let her go.

Lynne runs off to plead with the Justice Minister, while Sissel goes off to stop the execution and break Jowd out of prison. However, Lynne arrived at the Justice Minister's office to find him dead of a heart attack brought on by his own stress, and Sissel, after his own mission fails at the hands of Cabanela, arrives yet again to save another unfortunately dead person. Though the Justice Minister's mind is not changed until Sissel manages to get Amelie to call, proving her safety.

Lynne returns to the superintendant's office to see the injured Cabanela who had earlier been coerced by Yomiel into calling the Minister, demanding that the execution go ahead. After learning that Kamila and Yomiel is now aboard Sith's submarine (thanks to a tracking device) she heads there with Jowd. Lynne is attacked by the Yomiel-possessed Kamila and dies again when a torpedo impacts their detached section of the submarine. Sissel and Missile makes it aboard to resurrect her again and the four manage to escape with the help of Yomiel who had been betrayed by Sith.

Lynne helps the three ghosts reach the submarine where they travel back in time, four minutes before Yomiel's own death, ten years prior. They meet the pre-teen Lynne who is taken by the hysterical Yomiel as hostage to hold off Detective Jowd. With the three ghosts combining their powers, the fated Temsik meterorite leaves a injures Jowd but spares Yomiel's life. Yomiel then saves Lynne from a falling monument and accepts defeat. Sissel Lynne thanks Jowd who gives her a detective badge, inspiring her to become a real detective like him and Sissel who was revealed to have been a cat is taken in by Jowd. With Yomiel's fate averted, the game's timeline is negated.

In the new timeline, Lynne has a celebratory party of her detective promotion with Kamila, Alma, Jowd and the immortal Sissel whom she recognizes from ten years before. She is Missile's owner in the new timeline.

Lynne's multiple deaths (and subsequent revivals) gives her a strong impression of a phoenix, a mythical species of bird that dies in a great fire when it expires and is imminently reborn from the ashes of the fire. Lynne's outward appearance (bright red, feather-like hair and bright yellow jacket) support this vision.

In a single evening, she was: 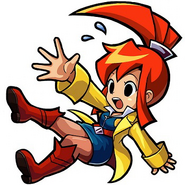 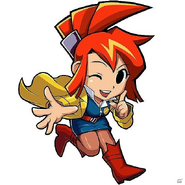 Add a photo to this gallery

In Ultimate Marvel vs. Capcom 3, Lynne is the base for one of Maya Fey's alternate colors. 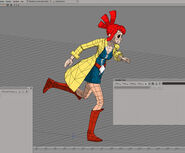 In-game render of Lynne during development of the game.

Add a photo to this gallery
Retrieved from "https://ghosttrick.fandom.com/wiki/Lynne?oldid=5800"
Community content is available under CC-BY-SA unless otherwise noted.