Memry is a character in Ghost Trick: Phantom Detective. She works in the Chicken Kitchen restaurant as a skating waitress serving chicken and drinking water to customers.

Memry was nearly killed when Rindge's van hit the chicken kitchen, but Lynne pushed her out of the way. Later witnessed by Sissel and Lynne through Detective Rindge's 4 mins death, it is revealed that Memry is an undercover agent. She help the police plant a listening device, AKA "ladybug", to listen the foreign criminal couple Beauty and Dandy. Beauty notices the ladybug and destroys it, which in turn stuns Rindge while driving, causing him and his car to collide into the restaurant, nearly killing Memry. Lynne however saves her in the nick of time but this results in her being crushed by the chicken decoration. She's also a co-worker of Rindge. 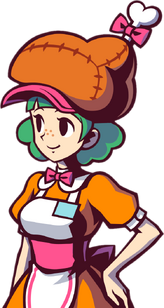 Add a photo to this gallery

Retrieved from "https://ghosttrick.fandom.com/wiki/Memry?oldid=5235"
Community content is available under CC-BY-SA unless otherwise noted.