Missile is a pomeranian belonging to Kamila, one of the major characters from Ghost Trick: Phantom Detective. He is usually seen to be overly enthusiastic, causing him to bark against almost anything that moves. This often leads to the old lady from next door to start kicking the wall to make him stop.

Missile is first seen early in the game (Chapter 2), after being killed by Tengo, who was looking for Lynne. He was saved by Sissel, and is the first character seen to be able to talk to him.

After Sissel leaves, Missile decides to follow Kamila, who had left to give Lynne a Music Box. He manages to open the door of the apartment eventually, and catches up with Kamila in the park. Unfortunately, he was hit by the scooter from one of the kidnappers, and died yet again.

Unlike previous time, Missile now has ghost powers of his own, as he died close to the Meteorite that unknowingly gave Sissel his powers as well. Missile is unable to perform ghost tricks, but instead he can swap objects that have the same shape. He initially uses this power to save Kamila, but accidentally kills someone else in the process.

Soon after, he is reunited with Sissel, and they use both of their abilities to save the other person. After this event, Sissel offers to save Missile from his own death, but Missile chooses to keep helping Sissel instead.

In an alternative timeline, Missile was killed by Tengo, who was never stopped by Sissel, together with Kamila in Lynne's apartment. This time however, Missile died in the presence of Yomiel, giving him his ghost powers.

Missile made his way to the Junkyard using the normal pathways, as he can not use the telephone lines. When he arrived, he heard about Lynne's death from one of the police inspectors. He also met with Sissel, who had taken the form of a red lamp.

As Sissel declined working together with Missile, the latter failed to save anyone. So all he could do was to go back in time, to the moment of Yomiel's death. He then waited 10 years until the same fateful day would happen. This time, he took the form of Ray, and decided to guide Sissel, so he would cooperate with him this time.

His theme is "Missile ~ A Courageous Little Animal"

Missile appears briefly in Ultimate Marvel vs. Capcom 3, in Heroes and Heralds Mode, as a collectible card. 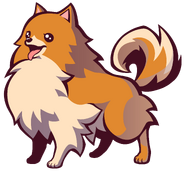 Retrieved from "https://ghosttrick.fandom.com/wiki/Missile?oldid=5717"
Community content is available under CC-BY-SA unless otherwise noted.